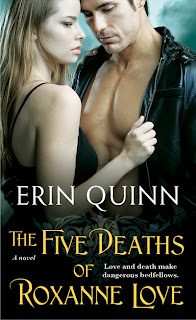 The dishwasher was sprawled beside the sink. She could only see his legs and feet, but she recognized the rolled-up jeans, bright yellow sneakers, and hem of his too-big Iron Man T-shirt bunched around his thighs. The black ooze splattered his inert form.

Flash, flash, flash. The images bombarded her so fast that she could barely focus on one before moving to another.


Reece stood in the doorway to the small office that was tucked between the walk-in refrigerator and the far wall, facing away from her. Through the big window that allowed an unobstructed view from the desk into the kitchen, she saw a man in front of the opened safe.


“You shot him. You fucking shot Manny,” Reece shouted.


Reece knew this masked man. More than that, her brother had let him in. Disbelief pierced her as the man spoke. His words came disembodied from behind the stitched mask and all the more terrifying for those frigid eyes in their obsidian setting.