A friend in need.... Please help

Please help: Tina Gerow/Cassie Ryan has been taken suddenly and seriously ill. She has an affliction called Arteriovenous malformation or AVM in her brain which has led to multiple surgeries and an extended stay in ICU. No family is ever prepared for such a thing and Tina's is no exception. In times like this, every dollar helps and her friends in the writing community are banding together to ask you to open your hearts (and wallets) to help get Tina's family through this.

Tina is well known to readers and authors across the country who have embraced her books, most recently, (writing as Cassie Ryan) SEDUCING THE SUCCUBUS (Berkley/October 2010) and coming in April 2011, THE DEMON AND THE SUCCUBUS.

Please send your prayers, positive energy and love out into the universe with Tina's name on it. Cards can be mailed to: Tina Gerow, c/o SBP PO BOX 42255, Phoenix, AZ 85080.

Any donations you would like to make to Tina Gerow/Cassie Ryan to help with the burden of mounting medical bills, can be given by visiting: https://sites.google.com/site/tinagerowandfamily or by sending a check to Tina Gerow, c/o SBP PO BOX 42255, Phoenix, AZ 85080.

If you have a blog, website or newsletter, please help us spread the word!
Posted by Erin Quinn at 10:50 AM 2 comments:

On November 20th, DESERT ROSE RWA will be putting on their FIFTH ANNUAL FREE FALL WORKSHOP  (Yep, you read that right!  Free!)  And check out who's going to be there!

Come enjoy one of the most talked about free workshops in the West, presented by our very own Desert Rose volunteers. We are privileged to have some of the top-selling authors in the nation in our membership, so come see what the fuss is all about and learn from our industry professionals. The stellar line-up includes: Christina Skye, Jennifer Ashley, Tara Taylor Quinn, Laurie Schnebly Campbell, Denise Domning, Donna Hatch, Gini Koch, Annette Mahon, Cathy McDavid, Erin Quinn, Vijaya Schartz, Amber Scott, and Kris Tualla. Please check back later for a complete listing of workshop times and descriptions.

And the winner of the SDSU Writers Conference Scholarship is....

Congratulations Connie!  I'll be in touch!

You can find more information about the conference at:  http://www.ces.sdsu.edu/Pages/Engine.aspx?id=735
Posted by Erin Quinn at 3:32 PM No comments: 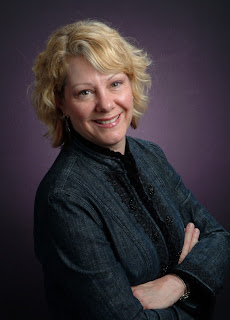 I love having new authors on my site and Kris Tualla should feel the warm welcome coming her way, because I'm excited to have her.  Kris's debut novel, A WOMAN OF CHOICE, is an intriguing tale of history, set in Missouri in the 1800s and featuring a Viking hero.  I asked Kris to blog about her hero, Nicolas and I think you'll like what she had to see.  There's an excerpt at the end that you'll want to read.  And, of course, there's a giveaway.  A free download of A WOMAN OF CHOICE if you leave a comment!

When I first met Nicolas Reidar Hansen, I was struck by his size: six-four and two-fifty of solid muscle. Then he looked at me and I saw his beauty. Classic Nordic features, long hair the color of sunlit straw, and intense navy blue eyes. When he spoke, it felt like thunder on a bright autumn day.
But something was missing. Life. I soon realized that the death of his wife, six years earlier, had effectively killed him as well. Though well-educated and world-traveled, Nicolas was still a romantic at heart. He believed his one and only chance at true love died with her. 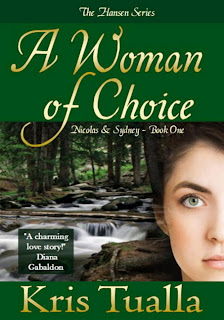 On that chilly day, Nicolas had just rescued a badly injured woman on his property. His intent was to get her out of his house as quickly as possible, before her presence disrupted the carefully arranged details of his world; details which kept him numbed to the pain caused by all he had lost.
But circumstances made that impossible. She was going to have to stay a while - and it wasn't in her nature to stay quietly. Every challenge, every glance, every laugh, and every touch stirred parts of Nicolas that had long laid dormant. Slowly, he opened himself to her. He began to see possibilities. He began to feel again. He began to hope.

Her situation, as it turned out, was much worse than his. But she challenged him even so: did he have the courage to live his life?

The love of a strong woman makes a man. And it remakes a broken one. Nicolas grows over three volumes to be more than he ever would have been, more than he ever dreamt he could be. Into the man he was destined to be: a true hero in every sense of the word.

And all because a strong woman loved him.

I love him. I think you will, too.

The dogs wouldn’t come back. They yowled and yipped and danced around a muddy heap of fabric lumped beside the receding rain-swollen creek.


“Can’t you control those mutts, Rick?” Nicolas Hansen growled. Irritated, he reined Rusten toward the hounds and wondered which particular Cheltenham resident upstream had seen fit to discard their curtains into his creek. But when he got close, his gut twisted. 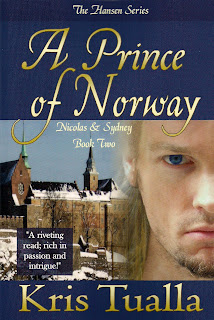 Nicolas threw himself from the gelding. “Rick! Get over here!”

He knelt beside the crumpled and filthy form. His knees sunk into the chilled creekside mud and the roar of the tumbling water almost drowned the roar of his pulse. He stretched his hand over the still figure and hesitated, hoping for some sign of life. There was none. He gently turned the body toward him.

She exhaled a faint moan.

“It’s a woman, Rick!” Nicolas called over his shoulder. “And she’s alive!”

His gaze skimmed the woman’s mud-smeared face. Dark brows slanted from a bruised temple. Their arches flanked a straight nose with a nasty bump. Her lips were blue and the lower one was split and bleeding. That was a good sign. It meant her heart was beating.

“Å min Gud…” Nicolas moaned. He yanked his hunting dirk from its sheath and held it over the woman’s skirt.

He hesitated again, weighing the ramifications to himself—and her—if he cut away her clothing. But he knew he couldn’t balance her on his horse anchored as she was by yards of mud-saturated wool. In Nicolas’s personal economy, saving her life far outweighed saving their reputations.

If he wasn’t too late already.

Rickard’s voice spilled over his shoulder, “Wrap her in this.” A blanket nudged his arm.

Nicolas nodded his acknowledgement. He severed the full skirt from her bodice in a few quick strokes. He left her chemise intact and his gaze didn’t linger on her bruised and bare legs. He rolled her into the blanket, stood with her cradled in his arms, and faced Rickard.

“Hand her up to me,” he said as he transferred the woman into his best friend’s sturdy grasp. Rickard accepted the burden without pause.

Nicolas mounted his tall gelding and leaned down to gather the limp bundle. He shifted a bit until he felt both he and the woman were secure on Rusten’s back. “Ride ahead, will you? Tell Addie what’s coming.”

Rickard nodded and turned to his own mount. “Do you know her?”

Nicolas frowned. “No. Do you?”

Rickard prodded his stallion closer and leaned over the unconscious woman. “I don’t think so. Hard to tell with all the mud and the bruising, though.”

Rickard kicked his horse to an easy canter, waved over his shoulder, and he was gone.

Nicolas followed at a steady walk, afraid to jar his fragile passenger by hurrying the huge gelding. He guided Rusten with his knees while he considered her pale, muddy face.

Lying ten miles southwest of St. Louis, Cheltenham was a small township. Nicolas had lived here his entire life—save for four university years and the year he was obliged to stay in Norway. He believed he knew all of its residents, so he was fairly certain he had never seen this woman before.

And that made her appearance even more puzzling. Where had she come from? Where was she headed? And how did she end up in the creek to begin with? Was she the victim of an accident? Or was something more sinister afoot?

“I suppose if you awaken, you’ll explain yourself,” he mumbled and shifted her position a little. Her eyelids fluttered and she gave a tiny whimper. But she lay as limp as a drowned cat in his arms.

When he reached the manor, his aging housekeeper stood in the doorway beside Rickard, craning her neck and worrying her apron. His friend stepped forward, accepted the feminine bundle once again, and held her while Nicolas dismounted.

“Thanks, Rick,” Nicolas said as he took the woman and hugged her securely against his chest. He faced Addie. “We’ll put her in the room at the end of the hall.”

She nodded and followed him into the house. “Poor thing,” she cooed.

Nicolas topped the stairs without noticeable effort and headed toward the uninhabited room, the furthest one from his. After all, he had no interest in any sort of entanglement and fully expected to return this unexpected and unwanted female to whomever she belonged as soon as she regained consciousness. Once in the room, he laid his mysterious charge on the bed and gave her over to Addie’s competent care.

“Rick?” he called down the staircase.

“I’m here, Nick.” Rickard stepped out of Nicolas’s study and gulped a glass of amber liquid.

Nicolas snorted and started down the steps. “Let’s get back to hunting, eh? Before you finish off my best brandy!”

Rickard laughed and set down the empty glass. “You’ve got more stashed in here than even I could finish and you know it!”

Nicolas reached him, grinned and slapped his shoulder. “Come on, then. If you can manage those dogs, I’ve a taste for pheasant for supper tonight!”

All books are available in trade paperback at Amazon, and in e-book for Kindle (USA & UK), Nook, and Smashwords

Book One ~ A Woman of Choice

Book Two ~ A Prince of Norway

New book blog over at Wall to Wall Books

A friend of mine is a voracious reader and, like most of us, she likes to talk about the books she's read.  Stop by over at Wall To Wall books and say hi.  She's got some great contests going too!
Posted by Erin Quinn at 7:08 AM 2 comments:

I haven't given anything away on the blog for awhile--life has been so busy I've just lost track of time.  But I think, in honor of November, I should give away a book.


So, tell me the BEST book you read this year and that I should absolutely read and I'll enter you in the contest.  Don't forget to check back to see if you won.  I have a couple prizes from past contests that I haven't been able to find the winner--most notably the winner of my title contest.  MizzCrow--you won but I haven't been able to reach you!

Anyway, give me ONE TITLE of THE BEST BOOK you read this year.  Just one, just your favorite.  (I know, it's going to be hard to choose, right?)  Winner gets readers choice of  Haunting Beauty or Haunting Warrior (which, by the way, are being repackaged as A Mists of Ireland Novel.  Cool huh?
Posted by Erin Quinn at 8:06 AM 16 comments: