Welcome Kathryne Kennedy, author of BENEATH THE THIRTEEN MOONS 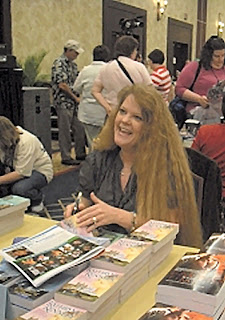 Yes, I do have favorites.  Like every other writer, I am a reader first.  I love a good story.  I really love a great one and Kathryne Kennedy delivers that again and again.  Her fresh voice and vivid imagination always leave me in awe (and scratching my head thinking, how in the world did she think of that?????)

That said, it's no surprise that I beg Kathryne to put me on her blog tour when she has a new release and kind soul that she is, she always says yes.  So without further ado, please welcome Kathryne and read about BENEATH THE THIRTEEN MOONS which hits bookshelves this week.  Take it from me, it's a colorful, lush romance set in a world of it's own!

Don't forget to check out the details below....there's a give away!

It’s great to be back here at your blog as a guest today. My publisher is giving away two copies of Beneath the Thirteen Moons (U.S. & Canada addresses only) to two lucky commenters today, so be sure to leave a comment. I’d love to hear from you!

I’m here to celebrate the re-release of my very first book, Beneath the Thirteen Moons, available now in mass-market paperback. I’m often asked how I came up with the world, so I thought that I’d post the recipe for my world-building today just for fun. 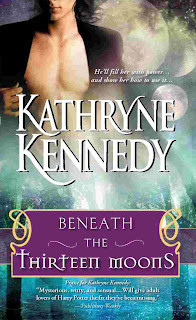 Recipe for Building the World of Sea Forest

Take a dash of Tarzan, who lives within the canopy of the jungle.

Reserve the land, adding heaping amounts of water to cover the world, so that all life is forced to exist and survive within the ocean trees.

Sprinkle in a touch of Venice, with waterways instead of roads.

Cover it with thirteen moons, so that the tidal pulls cause different directional currents within the waterways of the trees.

Add a touch of magic to help the colonists survive on this hostile planet, in the form of zabbaroot, which only some humans can tolerate. But if they can, it allows them to See, Push, and Change elements at the molecular level.

Fold in a gorgeous aristocracy who are genetically inclined to tolerate the zabbaroot--and use it to maintain power in the world.

Mix in a dash of a wild genetic streak, that allows an occasional peasant or two to use zabbaroot, to an extent surpassing even the royals of the planet.

Blend in natives to the planet, with their own goals and ideals, including a little monk-fish named Jaja who is comical and yet has a deeper purpose toward mankind.

Heat it up to smoking hot when Mahri, a swamp-dweller and smuggler of the zabbaroot, kidnaps Korl, the crown prince of Sea Forest.

Serve with a drizzle of chocolate. There’s nothing better than romance and chocolate…okay, maybe a few things, but not many. ;}

BENEATH THE THIRTEEN MOONS BY KATHRYNE KENNEDY—IN STORES DECEMBER 2010

In a magical watery world of the Sea Forest, the divide between the rulers and the people is an uncrossable chasm. Handsome, arrogant prince Korl Com'nder has lived a life of luxury that is nothing more than a fantasy to the people he rules. Until the day he is accidentally kidnapped by a beautiful outlaw smuggler and is forced to open his eyes to the world outside his palace walls.

She's an outcast, but at least she has her independence...

Mahri Zin would stop at nothing to save her village, and when they needed a healer she didn't think twice about kidnapping one. But when she realizes that the healer she so impulsively stole is none other than the crown prince of Sea Forest, Mahri knows that she has a chance to change the fate of her people...

Kathryne Kennedy is a multipublished, award-winning author of magical romances. She’s lived in Guam, Okinawa, and several states in the U.S., and currently lives in Arizona with her wonderful family—which includes two very tiny Chihuahuas. She welcomes readers to visit her website where she has ongoing contests at: http://www.kathrynekennedy.com/.

Are you there world? It's me, Erin 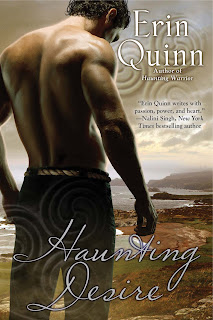 Lordy, the last few months have been insane.  I usually feel like I'm on a dead run, but lately it's been more like a flat out run-for-my-life!!!!  After a big of burn and churn, HAUNTING DESIRE is finally in the can.  The next time I see it will be for a final proofing.  I'm really excited about this one hitting the shelves on April 4, 2011, even though--or especially because--it has consumed so much of my life.

For those of you who have asked, my friend and sister author Tina Gerow is doing much better and we're all hoping for a full recovery!  It will be a long, arduous (and no doubt expensive) journey back to good health, but thanks to all who have already opened their hearts and wallets to Tina.  If you find you have an extra dollar or two, please think of giving this season.  You can find more informtion here.

And then there are the holidays!  I'm trying to keep my spirit energized for the approaching weeks.  As I look around, I can't help but see just how truly blessed I am.  I have my health, my family, and the opportunity to tell my stories.  I am so fortunate.

Hope you'll check back on Wednesday when I host the fabulous Kathryne Kennedy.  She's got a new release, BENEATH THE THIRTEEN MOONS, which is a wonderful trip into her amazing imagination.  One of my favorite of her books.  There's a giveaway......
Posted by Erin Quinn at 9:13 AM 2 comments: