Where else can you get sigh-worthy entertainment for 99 cents? 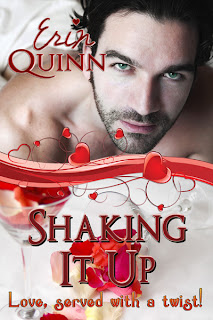 Shaking It Up -- Favorite Scene

Email ThisBlogThis!Share to TwitterShare to FacebookShare to Pinterest
Labels: Shaking it up

Falling in love with the wrong man has never been so right!

Shaking It Up by Erin Quinn
Daisy L’Amore is faced with impossible choices. A prophecy given a year ago has Daisy and her two best friends racing the clock to find love before midnight on Valentine’s Day or they will lose everything they’ve worked for, including With a Twist, the martini bar and bistro the three of them own. A crystal heart and a gypsy’s words guide them, but love has a way of making its own rules, and Daisy is afraid to break them.

Romeo Corazón is shaking up Daisy’s world, but will the transformation he brings to her life be the downfall of everything she values? Or will falling in love with the wrong man make everything right?

Don't miss out on the full series!