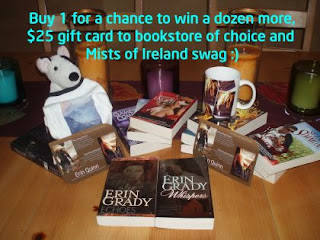 Congratulations to LeAnne of Birch River West Virginia.  LeAnne has won my Thank You to My Readers prize pack with books, Mists of Ireland swag and a bookstore giftcard!  Want to learn about events like this so you can enter?  Sign up for my newsletter
Posted by Erin Quinn at 12:40 PM 1 comment:

I wonder if anyone in today's world doesn't feel like every day is a juggling act.  Family, career, responsibilities, friends, pets....  Some days it's just flat out impossible to keep all my balls in the air.

The past month has been especially hard.  I've been on the road a lot.  I like to travel, but I am a quintessential homebody.  I look forward to just being home.  My husband travels way more than I do and I know I'd be miserable in that kind of job.

So for me, traveling (in a non-vacation capacity, of course) is grueling.  It messes up my schedule and it exhausts me.  I don't sleep at the same times, I don't get up at the same times, and I don't do anything else at the same times either.  In June, I did a week-long series of meetings in Santa Clara, California and then I turned around, spent a few brief days at home and did another week-long conference (Romance Writers of America National conference where I met on of my favorite authors, Nalini Singh!) in New York City, New York.  A few days back from that and I was off to Utah to stay with my critique partner and brainstorm our new books.  I get a couple of weeks respite before I head to Denver, Colorado to see my sister and attend RomCon.  (If you're in the area, you should come see me there.  It's a fun conference and not too hard on the pocketbook either.  Plus if you use my reg code you get $20 off).


Anyway, during all this, my oldest child has been in Spain acting as an au pair to five year old twins and my youngest has been in summer mode (which means she and her girl friends have sleep overs almost every night, stay up late and sleep until the afternoon).  I see her for about 10 minutes a day.  My husband and I have managed to high-five each other as we pass at the front door.  The dogs and I have managed to spend some quality time together...but only just.  :)

And somewhere in there I've been trying to help spread the word about the two releases I have coming up.  Haunting Beauty will be having a re-release in mass market paperback (originally published in Trade paperback in 8/09.  If you've been meaning to read it, you'll find it in bookstores again in September!)

Haunting Embrace, the last in my Mists of Ireland series (at least for now) will be out in October 2011.  I am really excited about this one!  The trailer will be coming soon so I can share the story line with you.

Anyway, that's my summer in a nutshell--juggling.  How has yours been?
Posted by Erin Quinn at 10:14 AM 1 comment: