I'm at that point in my new book where I always get a little scared. Okay, a lot scared. I don't know if it's just me or if every writer shares these fears that they won't be able to pull it off. That somehow the whole thing is going to come crashing down and all I'll have are a bunch of pages with words on them that don't amount to a short story let alone a novel. Time to close my eyes and visualize. :-)

By the way, my contests are still going on. You can win a set of 3 Linda Style's books this month or enter my grand prize giveaway: buy 1 and enter for the chance to win 16 plus prizes!
Posted by Erin Quinn at 8:12 AM 2 comments: 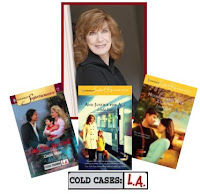 This month I have the extreme honor of featuring the mulit-published, award-winning, and extremely talented Linda Style. Linda's books have been nominated for numerous awards and have won both The Daphne du Maurier Award and The Orange Rose for best long contemporary of the year. For this month's contest, Linda will be giving away a signed SET of three Cold Case novels and I'll throw in a a beautiful Irish Artesian necklace AND a $10 Amazon gift card. Check out my contest page for more information at http://www.erinquinn.info/

I had the pleasure of asking Linda some of deep and personal questions. Read more to find out her deepest, darkest secrets....

Linda: I would like the power to transport myself in time to any place I wanted to go. That way I could travel everywhere, see history in the making, hang out with people I admire and see if our history books and novels even come close to reality. If I could be a Super hero, I'd pick Wonder Woman for sure. I have a tiny little Wonder Woman character on my desk that was given to me by some very good writer friends to remind me of the strength within, something writers need every once in a while.

Erin: Great answer. I, too, would love to travel back and see just what it was like in other times. However, I would like to take my coffee maker and bathtub with me..... Next question: On a bad hair day do you reach for a scrunchi or a cap?

Linda: Neither -- I reach for the clip.

Linda: Boxers on me, bikini briefs on him

Erin: Ah, very wise woman. I like. :-) So tell us, Linda, what is your most embarrassing moment?

Linda: Accidentally spraying too much perfume on myself and meeting an editor in the elevator at a conference. The look on her face wasn't good. I actually made my first sale to her later, so maybe I made an impression. :-)

Erin: LOL. Well at least it was a memorable meeting. Mine usually involve me with cocktail sauce on my boob and a stupid look on my face. sigh. Ok, you side stepped that one beautifully, but how about this one? Who would be on your "safe list" for sex? (Meaning, even though you’re married, you could still have sex with this one famous person if the opportunity ever arose.)

Linda: Hugh Jackman immediately comes to mind. Hey, maybe I could get a book deal out of it later. Might as well think ahead. :-)

Erin: I'm sure we were sisters in another life. We've already talked about the infamous "washing his chest with a bucket of water" scene from Australia. OMG. Can you imagine being married to such a man? I'd be a basket case over all the woman lusting after him.

Okay, finally, a book question—favorite hero you’ve ever written. Why?

Linda: I love all my heroes! That's like having to pick which of your children is your favorite. But, okay...if I have to... the hero in my most recent book is always first and foremost in my mind...and right now, that's Lincoln Crusoe in THE MISTAKE SHE MADE. He's just been released from jail, has amnesia and he's got issues. He's a complicated man, intense, intriguing, a man without a past...and yet, he's vulnerable. That quality in a strong man goes right to my heart.

Erin: Sigh...I like him already. This sounds like a GREAT book! Tell us more about THE MISTAKE SHE MADE and why YOU think we’ll love it.

Linda: THE MISTAKE SHE MADE is about a woman and the man she wrongly accused of rape. Lincoln Crusoe spent ten years in prison for a crime he didn't commit. When DNA proves he's innocent, Tori Amhearst is horrified. She has to make it right. But that's easier said than done. It's a complex plot with complex characters who despite tragic, life altering circumstances fight to have the life they so deserves. Figuring out a way they could do this--with each other--was a true writer's challenge. The Romantic Times Book Club gave it a 4.5 Star review, saying "Style offers an original story and wonderfully compelling characters. Linc is attractive in both his strength and his need, while Tori is remarkably complex in her desire to overcome her past."

Erin: Wow, I got chills over that. It's so timely too. I just read an article a few weeks ago about a man and woman who had the exact same situation--she falsely accused him of rape and he served time only to be proven innocent. They are now friends and have written a book together. I don't think it will have the HEA that your story does, but it's such a fascinating scenario.

Linda, thank you so much for stopping by! I can't wait to read THE MISTAKE SHE MADE!
Posted by Erin Quinn at 9:29 AM 25 comments: 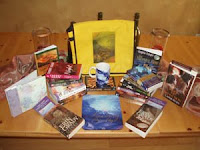 This is the mother of all contests. Take a look at my site and the giveaway I have going for anyone who preorders HAUNTING BEAUTY. I'm added to it every month, too, so the pot could get even sweeter! For more details, go to http://www.erinquinn.info/Grand_Prize.htm
Posted by Erin Quinn at 2:24 PM 2 comments: