You've heard me say it before, but I can't help it--it's true.  One of the best things about being a writer is knowing other writers and being able to introduce them to you.  KC Klein is a fellow romance writer and one of the nicest people I've ever met.  It's my pleasure to host her here today to talk about her novel, TEXAS WIDE OPEN.  Leave a comment and win a free download of this great book!

So, without further ado....  From the backcover of TEXAS WIDE OPEN: 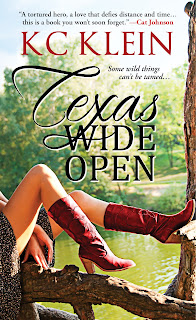 “A tortured hero, a love that defies distance and time…this is a book you won’t soon forget.” –Cat Johnson


Katie Harris loved growing up on a ranch. She had her horse, the beautiful Texas prairie, and Cole Logan, the cowboy next door. But there are a lot of secrets hidden under a Texas sky…


Katie always knew she’d marry Cole one day—until he broke her dreams and her heart. But now that Katie’s father is sick, she’s back home, older, wiser and nowhere near the love-sick fool she once was.


Cole knows Katie doesn’t want anything to do with him. But after so many years, he can’t pretend she’s no more than a neighbor. Holding his ground was hard enough when she was seventeen. Now that she’s her own woman, Cole’s heart doesn’t stand a chance…

Katie watched as Cole slowly turned, and at the sight of his bare chest, smooth and ripped with muscle, she locked her knees to keep upright. Instead of his inviting smile, there was a hardness she rarely saw that contrasted with the desire in his eyes.


Cole stood and stared. The silence between them crackled as if a whole conversation could be said without words.


Her breathing quickened as her nipples contracted into small, tight buds, sensitive to the brush of the cotton across them. She refused to hide her body’s reaction even as a flush of heat rushed to her cheeks. She’d been waiting all of her life for this moment. She was tired of hiding. She was ready. Unashamed, she gazed in his eyes and let the wealth of her feelings pour into her face.


Cole was no coward—he returned stare for stare—but she could see his jaw flex and knew he was pissed. She’d pushed him hard, but this was where the women separated themselves from the girls.


“I’m not a child any longer.” She took a step closer.


“And I told you, if you wear that shirt again, I’ll burn it,” he growled.


But Cole would have to do more than display a little anger to scare her. Before she lost courage, Katie crossed her arms and pulled.


She threw her shirt in his face, along with her challenge. “Go ahead and do it.”
_______
KC Klein has lived most of her life with her head in the clouds and her nose buried in a book. She did stop reading long enough to make a home with a real life hero, her husband, for over sixteen years. A mother of two children, she spends her time slaying dragons, saving princesses, and championing the belief in the happily-ever-after. Her debut novel, Dark Future, is a finalist in the 2012 Prism contest and has been honored with a reviewer’s choice award. Her other titles include a science fiction romance anthology, Hotter on the Edge, and a new contemporary romance, Texas Wide Open. KC loves to hear from readers and can be found desperately pounding away on her laptop in yoga pants and leopard slippers or more conveniently at www.kckleinbooks.com.
To buy TEXAS WIDE OPEN at:
Amazon (on sale for $2.99!)