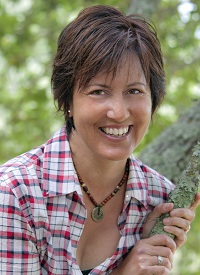 Recently I was a finalist in the paranormal catagory of the Booksellers Best contest (and I won!!!) which was very exciting.  I was so thrilled by it all, that I started reading some of the other finalists in both paranormal and historical which are my favorite categories.  Almost as thrilling as being one of the final few in this contest, was the great new authors I discovered.  I absolutely LOVE discovering new authors--although sometimes I don't manage to discover them until late in their careers, lol.

One of the first books from Booksellers Best that I read blew me away.  Titled CAPTURED by Julia Rachel Barnett, it's a fast-paced science fiction story that shouldn't have been my cup of tea (because I don't read much science fiction) but it totally was.  The heroine is so tough and likeable, and the hero such a great man who changes so much.  I really thought it was great.  No surprise, this book won the Best First Book category in the contest!

I ask Julia to stop by and blog with me and I was thrilled when she agreed.  So, without further ado, I welcome Julia Rachel Barnett to Quinn's Essentials!  Be sure to leave a comment because Julia is giving away an autographed copy of Captured to one lucky commenter! 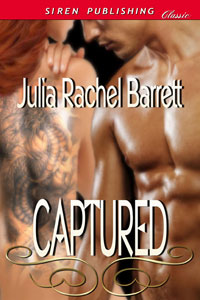 When Erin read my science fiction novella, Captured, and invited me to write a guest post for her blog, I was thrilled, humbled, excited and nervous - she is so far out of my league. But, how could I turn down such a generous offer to talk about Captured?

This book is such a big part of me. I am in love with the story and the two main characters, Mari and Ekkatt. The truth is, the book began as a dream. It may sound odd, but while I was in the middle of working on a four-book science fiction series, I dreamed Captured from start to finish. I stopped the series and wrote Captured in three weeks. It wasn’t all that hard, I simply recorded the dream, conversations and all. Thus Ekkatt and Mari sort of sprang from the top of my head fully-formed like a fantasy Athena.

The novella is a bit of a morality play. Mari is a woman captured for the meat market by trappers from advanced species, a species that officially considers us to be at the same evolutionary level as apes. While Ekkatt’s people, the Atun, are vegetarians, many other species in his quadrant of the galaxy have developed a taste for human flesh and the trade is quite lucrative. Humans are an oddity, a curiosity. The species populating the planets Ekkatt is familiar with are singular. For example, all Ekkatt’s people have black hair, bronze skin and yellow eyes, while we come in a variety of shapes, sizes and colors. He notices Mari because he is attracted by the sun shining off her red hair.

When Mari wakes from stasis during the voyage and Ekkatt has the opportunity to interact with her, he gradually comes to the disturbing realization that everything he’s been taught about humans is a lie. While humans may not be as technologically advanced as the Atun, they are every bit as intelligent and civilized, and most important, they possess a soul, the one thing the religious authorities of Atun insist a human does not possess.

Once Ekkatt’s eyes are opened, he cannot close them again and he is rocked by what he’s done; he’s sent sentient beings to their deaths. His entire world view is upended. Overwhelmed by guilt, he decides that although he cannot save all the cargo, he will risk everything to save this one human woman.

Thus begins the impossible love story of Mari and Ekkatt. I think it’s a beautiful tale. If a reader asked me to recommend only one of my books, I would recommend Captured. 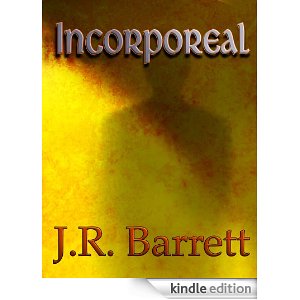 Sara Wise is sick of ghosts. They’ve haunted her since she was a child, destroying her family, endangering her life. When an incorporeal being appears in her shower, she curses him soundly and orders him out, but this ghost is sticky. Not only does he invade her shower, he moves into her home, invading her dreams, sharing her bed. The reluctant Sara finds herself falling in love with a dead man.

Despite Sara’s objections, Natan de Manua isn’t permitted to leave. Protecting the woman is both his penance and his means to redemption. She’s not easy to protect, she fights him nearly every step of the way, except in her bed. Nathan may have come to regain his soul, but instead he risks losing his heart.

You can find more about Julia at:  http://juliarachelbarrett.net/

Whoa! That sounds like a great read! *crosses fingers to win* ;)

Welcome Ms.Barnett,
This sounds like a great story. I'm always looking for a new author to explore! I can't wait to read this one. @Ms. Quinn, thank you for sharing, otherwise, it probably would have been awhile before I found Ms. Barnett's book.

Congrats on your win, it sounds well deserved. I love how CAPTURED came to you. The whole dream thing...how did you remember it all clearly enough to write it? I always forget mine shortly after getting up....:)
It sounds like an excellent read!

Dear Erin - thanks so much for having me! Sorry, I've been away all morning.

Ivy - I've always had pretty much total recall when it comes to dreams. I have another book, My Everything, a work of romance suspense, that I also dreamed from start to finish. Thanks for commenting and asking!

HI Julia, Your books sounds very interesting (even though like Erin, science fiction is not my cup of tea :o). Its so hard to make a heroine tough and lovable.
All the best,
Cheers,
Rayka

Hi Rayka, this heroine sort of made herself. :)

Erin congrats on your award. I missed that somehow. Awesome! You know i love your work.

Julia your books sounds really intriguing and different from what's out there or at least from what I've read. lol I might be off base. You know it's meant to be when it takes only 3 weeks to write a book and then Erin Quinn says it's a must read! Congrats!! I love finding new authors and i wish you much success in the future.

That's why you are an author and I am not. I can never remember my dreams, let alone to actually write a story based on one.... Did you ever finish the series that you were working on when Captured interrupted you?

JenM - yeah, I did. Daughters of Persephone - it's a four-book futuristic SFR series - two books per book. It's on Amazon under Julia Barrett. :)

Julia, I love sci-fi and this story sounds amazing! I will add it to my list of books to read. I haven't been disappointed with any of Erin's recommendations. Thanks for sharing. Waleska (Wally_soto@yahoo.com)

Sounds like a great read! Thanks Julia for sharing why you love your story with us. Congrats to you both on your wins!

Thanks Anon and Christy - I was thrilled to win, and to be included in such a talented group!

Julia - congrats on winning the Booksellers Best award and on publication of both of your stories.

Like Erin, I usually find SF not my cup of tea but the description of CAPTURED won me over. And I sure wish I could dream entire stories, too! ;)

Good luck with both of them!

And Erin, thanks for introducing us to Julia.

Congratulations on your win, Erin! I'm so thrilled for you. :)

And thank you for introducing us to Julia's work. This novella sounds great!

Thanks Barbara and Jami - and thanks so much, Erin, for having me!

And the winner is.... Wally (Anonymous--Wally_soto@yahoo.com) Wally, Look for an email about how to claim your prize!