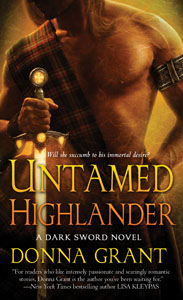 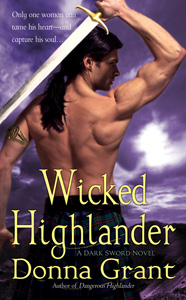 To find out more about me, please visit my website at www.DonnaGrant.com.  To read excerpts, see pictures of the Warriors, search characters, or watch book trailers, visit www.donnagrant.com/darksword.
Hugs,
D
Posted by Erin Quinn at 9:47 AM

Hi Donna!
congrats on your newest release - I can't wait to get my hands on it! I just read book #1 and I really enjoyed it :)
I love the fact that for Highlanders loyalty and family are the most important things.
wish you all the best, Melanie

Hi Donna do think its a coincidence that this blog is called QUINN'S Essentials :-)
I love this line ...
There’s nothing I love more than a brawny man in a kilt with a sword ready to defend what is his.
you hit the nail on the head and he doesnt have to be Scottish but goodness it helps (snickers). I can't wait to get Haydens book Congrats on the upcoming release Lass sales will go through the ROOF.
have a good one Ann/alba

silly me forgot to leave my addy btw I am a GFC
alba47@gmail.com

Hi Donna!
Oh boy do I need to get a hold of your Highlanders.....fanning face.....is it hot in here? :)
April
aprilfunshowers@gmail.com

My copy is on its way! You rock!

Way to go. I can not wait to read it! I love all your books. They put this nursing students mind at ease!!

Ann - thank you, sweetie! And I immediately think of you every time I come to Erin's blog. :D

Just wanted to know if there going to be any new characters in your new book? Well, I definitely fined out tomorrow. Love your books.

Can't wait to get the new release. Looking forward to reading it. Your such a great writer and one of my favorites!! Okcowgrl16@aol.com

Hey Donna!
Just wanted to give you a shoutout. I can not wait to get your book on my nook tonight. I love your Highlanders/Warriors. Here is to sales going through the roof.

Highlanders - Well they seemed to be intune with their surroundings, they embraced the heritage from language to the old ways passed down, and yes those kilts. Rawr

New follower :) Sent by Dangerous Women :D Well, got an email anyways and it made me curious :)

What is it that appeals to you about Highlanders?

For me personally I think what appeals to me most about Highlanders is that we just don't have men like that in our current age/technology. There is just something appealing about having this strong, sexy, alpha in a kilt that loves you and adores you and treasures you.. I'm sure they had more active erm love life's as well... Like hello? No internet back in the day so they made babies lol :P Never read yours but I'll add it to my TBR list because even though I like paranormal I can't resist a good Viking or Highlander book :) email is swtlilangel4jc At yahoo dot com.

I love how fierce and protective Highlanders are. They are the ultimate Alpha males. They also have that charming brogue! ;)

Karen - I usually always introduce new characters in my books. :)

Amy - I'm such a sucker for that brogue!

First of all, I LOVE YOUR BOOKS!! Highlander, just the word makes me all tingly! I true love that rugged, big strong man that can also be totally devoted to the love of his life! The kilt is a plus also!!

OHHh I love your HIghlanders!!! Congrats on the release I can't wait to get my hands on this one. As for loving Highlanders, I think for me it's partly in the blood. As I'm part Scottish and there's something about highlanders, all that strong alpha energy and loyalty and good looks!!! It just all appeals.
hugs,
WendyK

Donna I'm sure I will love them :D I'm a sucker for Highlanders *grins*

Hi donna. I can't wait to read your new book! Highlander's are just sooo sexy. So stong and sure of themselves. Plus that scottish accent makes my knees go weak :)

Erin and Donna, First off let me say both of you are awesome authors and I love your books.

Highlanders are my favorite type Hero. Just seeing a Highlander on the cover or seeing Highlander in the title and I can't help but sigh. There is an earthy strength and power I see in a Highlander. They are bold, courageous and exciting. Add in tall, dark and ruggedly handsome and it's a magical mix for me. I love my Highlanders and can't get enough of them. sigh...

Love your books and this series is awesome.Highlanders what is there not to admire,enjoy and love.They are strong,handsome,brooding and sexy as all get out.
Congrats on this great release.
tarenn98[at]yahoo[dot]com

I have these books on my TBR list!!! What do I like most about a Highlander? Their love for their family. The Brogue. mmmm....love a man with an accent -- especially that one. I'm dying to read your books! I'm calling the library tomorrow to see if they have them! I can't buy anything until the disability papers are all signed and dotted....lol!!!

Love to read about it all on FB though! I keep up with your page regularly!

Hi Donna and Erin!
Highlanders, time travel and beautiful country. What more could we ask for? (sigh)
lvsgund at gmail.com

Can't wait to read it!!! Highlanders rule in this house.I would love to win this book!!!

The Dark Sword series is new to me, yes I hang my head in shame. I will be chasing them up to read from here on on.

There is a lot to be said about a Highlander...they are strong, loyal, fierce, and dress for easy access...but I get weak-kneed over their thick...er...accents. :)

Hi Donna!
Huge congratulations on your newest release. Look forward to reading it. Love Highlanders for their strength, their loyalty to those they hold dear and gotta love the kilts!

Betty - I know! I love the accent. Get's me every time!

April - I agree! And thank you!

Bakin - Let's hope the paperwork gets filled out soon. And thank you! :)

Hilleary - glad you came and it's nice to meet you. I adore Barbara!

Marybelle - lol. No worries! Hope my Highlanders get your attention. ;)

Congrats on your release day.Highlanders are so sexy.Can't wait to read it.

Hi Donna!!
I'm a member of your street team :) I love Highlanders because they are so loyal and just so alpha male sexy!! (Ooh and the accents!! Gotta love the way they talk!!)
Ashley A
ash_app@hotmail.com

I can't wait to read the new book. Please enter me in your giveaway. Thanks.

Wendy A - thank you!

LOVE my Highlanders. Julie Garwood turned me on to them and now i enjoy them everywhere i go lol OK that sounded dirty but really i meant in books of course. I love those alpha male highlanders and their take charge attitudes. I have not read one of your books Donna but if Erin says their good i'm going to have to check them out.

And, because it was so much fun hosting Donna, I'm going to select another winner who wins Reader's Choice of Haunting Beauty or Haunting Warrior (print or kindle)
And that winner is.....

I'll be in touch with you both about your prizes!