Spotlight on: Cassie Ryan, author of Seducing the Succubus 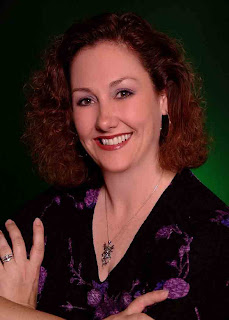 I'm really excited about having Cassie Ryan on my blog today!  Not only is she one of the nicest people you'll ever want to meet, Cassie is über talented.  Her new book, Seducing the Succubus, is guaranteed to be hot and steamy and a "can't put it down" read.  I had my pre-ordered and can't wait to dive in.

I asked Cassie to talk about her hero today and I think you'll like what she has to say.  We also get an excerpt!  AND she is giving away an autographed copy of SEDUCING THE SUCCUBUS to one luck winner!  Leave Cassie a comment to be entered to win.

Everyone is always talking about how much they love “tortured characters” in books. Characters who have to overcome some or even a lot of past baggage as they move through the story—and in the case of the villains—sometimes they never get past it or even try. But those inherently flawed characters seem to fascinate readers and writers alike. 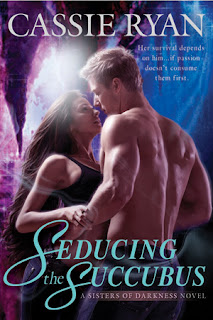 I must admit, I love tortured characters as well. As a writer, their scars from the past help lend motivation to their current actions. And I love watching their journey as the other characters end up pushing their buttons and making them confront that tortured past. Yes, just like most writers—I am kind of evil to my characters
Posted by Erin Quinn at 7:06 AM

I have read a book or two where i thought WHOAAAA! To much lol It never made me put it down but i had a hard time getting thru the intense part. Of course i think it depends on what kind of book your reading if your expecting it or not. I remember reading Christine Feehan Drake sisters series the last book Hidden Currents. The way Elle get treated in the first part of the book was not easy to read. I mean the books aren't the tamest for violence but not like this. I made it thru because i knew i loved the series and it would get better once i got thru the hard part. I wasn't expected that MUCH violence. Like i said if your expecting it it's not a big deal.

Thanks for stopping by, Lisa.

I LOOOVE Christine Feehan, but I know what you mean, some of that series was really hard to read, but worth it :)

The answer is "yes." Sometimes the emotions are just too intense and I have to put the book down and step away for awhile. The problem is, it tends to effect my mood so I have to get back to it and get through it. The other time I put a book down is when the protagonist just seems to be in a no win situation and there is no hope at all. I find that depressing and even harder to get through. I'm reading one of those now and I find myself reading ony 5 pages and then putting it down for the night.
Loved your excerpt! I have got to read this book! So glad there will be more to follow :-)

Great post...and yep, I've read a few of those books, too. I think in many, part of the problem is that the angst never changes. The hero never learns and grows from one torture to the next and it's the same old angst over and over again. That said, I do love tortured heroes, and your book sounds wonderful. Can't wait to read it!

Thank you for the new post, Cassie and Erin. I dig the name "Jezebeth", and the cover art for "The Demon and the Succubus" is COOL!

May I express a dissenting opinion? Unlike 99.99% of romance readers, I don't care for tortured characters.

For me, emotional baggage is a big turnoff. That goes for both fiction and real life.

Sure, everyone has baggage. But not everyone lives in terms of it. One of the most important marks of maturity is learning to deal with it, to put it to positive uses.

But the typical romance hero lets bad events from his past define him. They control his every move and keep him from living a full life, from being the man he can be.

More often than not, the hero is a cynic who has no justifiable reason to be cynical. He's rich, powerful, famous, respected. He has every reason to be happy---but no, he can't get over being dumped and humiliated by some chick many years ago. So he takes it out on the world in general and the heroine in particular.

That gives her an obstacle to overcome, a goal to work toward. I can see why lots of readers and writers go for this sort of scenario. Alas, I'm not one of them.

To me, a healthy attitude is sexy in a man---and a woman. If past events trouble them, they should be working as hard as possible to deal with them.

And they never, repeat never, rely on ANYONE else to do the job. Its entirely up to the person who's going through these traumas to overcome them. You can't get rid of someone else's emotional baggage any more than you can eat for someone else.

And lest someone say, "Well, if that's the case with the hero, how can the heroine save him from himself?" Durn right she can't! And he can't save her from her inner demons either. This is strictly a do-it-yourself job.

But this opens their relationship to other dynamics, other scenarios. For example, if one of the two focal characters undergoes a radical change, with the other still love him or her? Is the very presence of the significant other helping a character change for the better, or hindering the process? Does change bring out aspects of a character that surprise both of them?

These are just a few ideas. If only more romance writers would think outside of the box, instead of pounding out yet another saga of Arnold Angst!

Hmmm . . . remember that old saying, "If you want it done right, do it yourself"? Looks like I've got my work cut out for me!

I've read some books where some characters are too tortured. I either end up crying because of their pain or getting angry because they can't handle what's being throwing their way. I prefer characters that are tortured any more than a real person. Any more than that and it feels like I'm being tortured.

Yes, I've put down books before where the characters have been too tortured and/or the scenes seem added just for shock value.

I also like to see some breaks in the "torture"--otherwise, the happy ending at the end of the book is too abrupt and unbelievable.

Thanks everyone for stopping by. No matter what we think on this subject - it's clear we all love books and amazing characters :)

I have given up on books if the characters have not been what I expected and usually don't go back to it.
I saw your book on Amazon and loved the cover and also the recommendations!


Tanja, please email me at write2erinquinn (@) aol.com so I can get you hooked up with your autographed copy!