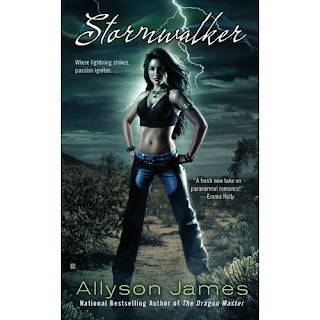 Jennifer Ashley (also knowns as Allyson James) is one of those authors that is destined for great things--maybe I should rephrase that.  She is already doing great things so she must be destined for amazing ones.  :)  Her latest release, STORMWALKER, (written as Allyson James) is an urban fantasy set in Arizona.  Beyond that, it's an engrossing, wonderful story that melds Native American culture and legends with the harsh reality of the arid and unforgiving lands in Northern Arizona.  Janet, the heroine of the story, is child of a goddess from Beneath and a Native American human.  She's got some mad skills and she's learning how to use them.  Her boyfriend, Mick, is flat out to die for--I can't tell you much more than that because I don't want to give a single spoiler.  Just be warned, you're gonna want one of your own.  And her host of secondary characters are just a joy to read--even when they aren't playing nice.  I think Nash was one of my favorite characters and I am so hoping he gets a lot of "on stage" time in the second book of the series, FIREWALKER. 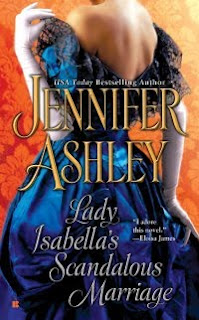 Not only does Jennifer/Allyson write great paranormal, but she writes amazing historical as well.  Her July release, LADY ISABELLA'S SCANDALOUS MARRIAGE, is one I've been anxiously awaiting ever since reading THE MADNESS OF LORD IAN MACKENZIE.  If you love historical romance and haven't tried Jennifer Ashley, pick up MADNESS now and I guarantee you'll be hooked.  It has one of the most compelling, sexy, broken, amazing heroes I've ever read.

Jennifer/Allyson is a mutl-talented author.  I don't know how she writes so many great books or how she keeps it all straight in her head, but she continues to impress me with her story telling.

Just a reminder to my readers....leaving comments on this blog may trigger a random giveaway.  You never know what you might win.....
Posted by Erin Quinn at 9:45 AM

An author who writes historicals and Urban Fantasy! That's how i like to see it. I got Stormwalker on my tbr list.

Thanks for hosting me today, Erin! I'm happy to participate in the giveaway--the winner can pick something (anything) from my backlist and I'll sign and send it. :-)

Absolutely adored Stormwalker. I now wait in anxious anticipation of Firewalker. Definitely one of the best books I've read in awhile :)

Congrats on your new release Jennifer! I'm not a huge Urban Fantasy fan, but to be honest, I've only read one or two such books. So, I'm always willing to give it a try! I much prefer historical fiction with elements of paranormal (ghosts or time travel). That's probably why I love Erin's books!

Well how cool is that....you heard it, readers choice from her backlist. Thanks Jennifer! And thanks for the terrific books you write!

I am a big fan of Jennifer's historicals. Ian stole my heart! I am anxiously waiting for Isabella & Mac's tale. I haven't tried any of the paranorms or UFs yet but plan to.

Thanks Erin for introducing me to someone new. I always like to have recommendations from someone I trust before reading someone new.

I had no idea that Jennifer and Allyson were the one and the same... I've got Jennifer's book on my TBB list and am adding UF books to my list.

Anyone Erin likes must be good! I've hear dof you but regrettfully have not read any of your books yet. I think it's really cool that you can write urban Fantasy and historicals. I look forward to checking out your books.

I didn't know Jennifer Ashley and Allyson James were the same either...wow. I love Jennifer's historicals...LADY ISABELLA'S SCANDALOUS MARRIAGE is now on my TBP list!!!

I read the teaser for Firewalker in the back of Stormwalker and can't wait for the next book.
Also looking forward to the next Shifter and Tales of the Shareem books.

I love Jennifer Ashley's books! She is an amazing writer...her books are an autobuy for me. :)

Hi Erin!
I have never tried "Urban Fantasy", I know alot of people read it. Maybe I should try some. I don't really care for Vampire books but this doesn't sound like it is Vampire, am I right? So maybe I would like it.

Hope everything is well with you and your family.

I missed Jennifer/Ashley (& Erin) at a book signing a couple of weeks ago, and I've been pouting ever since. (Gosh darn life getting in the way...the nerve!) But I'd love the chance to catch up on one of her books.

Stormwalker is fantastic! I can't wait till Firewalker. When will it be out, Jennifer?

Sounds so interesting! I"m usually a historical girl, but I'll try it, especially if I win. ;)

itsJUSTme: No, Stormwalker isn't a vampire book. It has shape shifters, dragons, Native American mythos and other fun stuff. Plus Coyote, my favorite trickster (who changes into a very HOT guy).

Thanks y'all for the great commments!

Alexis: FIREWALKER (and its great cover) is out in November 2010.

s7anna and Mitzi: Yes, I have a split personality and write as two people. I love it.

Hi Jennifer!
I haven't read your historical books yet, but I can't wait to read Stormwalker - it sounds fantastic and it has to be on my bookshelf *gg* I think I haven't read a book about a coyote shifter yet and I've to change that soon! thanks for being here :)
wish you all the best,
Ina

I have not read your books yet. They sound really good. I think it's interesting you write differant kinds of books. Thanks for the great post.
Sue B

Wow, Stormwalker looks really good and I have put it on my wishlist. I love urban fantasies.....this looks sizzling...hehe!!!