One of the biggest benefits of being an author is getting to meet so many other authors!  Rayka and I met at the Desert Dreams Writers Conference a couple of years ago and have been friends ever since.  Not only is she a highly successful business woman, Rayka has a wonderful imagination and is working on several books which I know will be great. 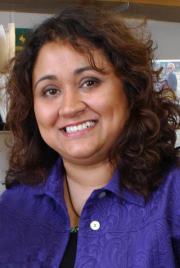 
(RM):  Erin, thanks for hosting me here today. I am so excited about my new release Enchanted Destiny, which has been getting 4 star reviews. One reviewer even said she gave it a 4 because she wanted to read more! I was a little worried about this book which doesn’t have a vampire, demon, or shapeshifter anywhere in sight. It’s about a witch dealing with the fact that she’s suddenly confronted with a vision of her destined soul mate and how she and her hero come to terms with it. I love writing their characters, and about Kat’s extended magical family. I’d love to chat with folks so stop by my website anytime: http://www.raykamennen.com/ or drop me a line at raykamennen (at) gmail.com.

Kat never believed she’d fall victim to her family’s stories about destined soul mates—she makes her own fate, thank you very much. When she walks by a construction site and admires the same sexy architect for the zillionth time in a week, the last thing she expects is to be slammed by a vision of his death.

Which activates the spell that will change their lives forever.

Jake is a single dad with a singular focus—create a stable life for him and his son. His ex-wife cured him of any desire to fall in love, but when an intriguing woman saves him from what should’ve been a deadly accident, he can’t shake his fascination. Too bad she’s crazy, claiming she’s a witch and that they’re soul mates—not exactly the “stable life” he had in mind.

Kat’s destiny comes with a deadline. If they don’t fall in love by her twenty-fifth birthday—a mere three weeks away—Jake will never find the peace he seeks and Kat will lose her magic forever.

Powell’s Books
Posted by Erin Quinn at 6:08 AM

Welcome, Rayka! Hope your visit to Quinn's Essentials is fun!

Thanks for hosting me, Erin. I'll stop back by during the day.

I love your cover. Every time I see it I smile. Congrats on your release. Can't wait to dig into it.

Oh, Rayka, just moved it up on my list of Entangled TBRs. lol. Love the premise! Keep on rocking, girl.

This sounds awesome, Rayka! I'm a sucker for books about witches :)
And seconding what Boone said. Your cover is BEAUTIFUL!

I love this novella and can't wait for the sequel. What are your plans for a novel after whetting out appetite with this nugget?

Hi Rayka! The novella sounds wonderful! I can't wait to read it!
Sarah

Your book sounds amazing, Rayka! Love the cover, too.

Thanks everyone for stopping by. Yes, I can't quite stop grinning about these covers :D. I even have notebooks with the Enchanted Destiny that I take everywhere with me...and of course, then people ask..... Also T shirts.
If I can just get these travel days for work out the way, I will finish editing the sequel, Enchanted Desire, and send it to my ever-patient editor.

Hi Rayka, I've been writing about witches recently, so I'm really looking forward to reading your take on them. And I know it's already been said - but your cover is gorgeous!

I love stories exploring the concept of destiny. Are we predetermined to fall in love with someone, or can we choose our own fate? Personally, I still haven't decided which I think it is. :-)

O I love that blurb, I want to read this book! Thanks for the guestpost Rayka.

I love this cover and the premise sounds perfect for a romantic comedy! :) Should totally be a movie, right? :)

Congratulations on the new release!

Lisa, from your post to the Hollywood God's ears. :o)

I love the premise of Enchanted Destiny--reminds me of how Samantha on Bewitched was always trying to get Darren to understand her "witchy" ways! Fun stuff!

Congrats on your Release, Rayka ---it looks and sounds GREAT! I love stories about witches and have a few books with them too. Im adding this to my TBB list ---cant wait to read it!

This book sounds wonderful, I am glad you were featured here so I could hear about you!

This book sounds great and would love to win and read it. Rayka is a new author for me and love to find new authors to check out. Love recommendations. Thanks for the giveaway and the chance to win.
christinebails@yahoo.com