Hot off the Press! A Touch of Twilight 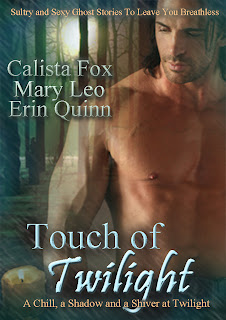 Touch of Twilight offers a sweet, sultry and sexy collection of ghost stories by Harlequin author Mary Leo, and award-winning authors Erin Quinn and Calista Fox. In Fox’s A Chill at Twilight, memories of a sexy cowboy named Luc Winston haunt Rachel Holt’s mind, but there’s a ghost in Onyx, Texas haunting her in reality... In Leo’s A Shadow at Twilight, uptight, but ever so sexy, Dillon Spencer, gets a second chance at life when his spirit takes up residency in Hilly Thomson's room at a hotel haunted by some rather notorious and opinionated ghosts. And in Quinn’s A Shiver at Twilight, a tragedy from the past haunts the house where Carly and JD are trapped for one terrifying Halloween night. The sparks fly between the two of them, but will they survive to explore the flames of passion they ignite?

Leave the lights—and a fan—on!

A Shiver at Twilight
Erin Quinn

Destiny brings them together, but ghosts of the past try to tear them apart . . . .

When Carly Ryan answers her friend's SOS on Halloween, she has no idea she'll end up stranded in a haunted house. But circumstances conspire against Carly and her rescue mission soon becomes a night of terror. Only the appearance of JD Dover helps her fight off the ghosts that lurk in every corner. Sexy, capable and undaunted, JD is more than happy to be Carly's knight in shining armor. Despite the creaking walls and eerie footsteps, despite the inexplicable ghostly happenings, Carly and JD can’t fight the attraction that consumes them and the passion that burns in their blood. Their coming together feels fated, but is it destiny or something more sinister that has drawn them to this haunted house? As they explore the attraction flaring between them, they fight to stay alive—but neither can guess the identity of the enemy they face or the lengths to which that enemy will go to cover up its sins.


A Chill at Twilight
By Calista Fox

Hell Hath No Fury Like a Best Friend Scorned…

With her country music career in a downward spiral, Rachel Holt returns to her hometown of Onyx, Texas. There, a sexy cowboy named Luc Winston and a ghost as ominous as the town’s namesake awaits her. Not only is the ghost of Rachel’s best friend, who died seven years ago, haunting the Whispering Willow Inn where Rachel is staying, she’s terrorizing Rachel.

Believing Peyton’s ghost feels slighted by her long absence and her sizzling, rekindled romance with too-hot-to-handle Luc, Rachel tries to make amends with the scorned spirit. Only to discover a web of secrets and lies that leave her questioning whether Peyton’s death was an accident, as reported…or murder.

But can she survive the ghost’s fury long enough to get to the truth?

A Shadow at Twilight
Mary Leo

When is love enough?

Hilly Thomson must once again give up her much-anticipated vacation in favor of her overbearing boss’s needs. Granted, her boss, Dillon Spencer, is now in a deep coma from a nasty car accident, but still…

To make matters worse, his spirit keeps appearing, mostly while she’s in the shower, asking questions and teasing her with his charm and sexy good looks. Before long this kinder, gentler Dillon has won her heart. But Dillon wasn’t alone in his car on that snowy road, and when he learns of the tragedy surrounding the accident his desire to return to his life is in question. Now Hilly, with the help of a few spunky, notoriously famous hotel ghosts, must convince Dillon that his life is worth fighting for, and nothing in this world or any other world can stop her from loving him, not even the threat of his returning to his old overbearing self.
Posted by Erin Quinn at 9:12 AM

I didn't know you had this in the works. Very cool!!

Yep! I actually wrote this novella earlier and have been waiting for the right authors to partner with on an anthology. Calista and Mary are wonderful so I'm very excited!

This sure is a nice surprise, a spooky anthology for Halloween. I think I'd like to read it, but only in bright daylight and one story at a time ;)

I love anthologies. Sometimes life just doesn't let you have the leisure time that you need to read lengthy novels. In comes the anthology! Too often, they are newer authors - but I love it when my tried and true authors are in one. I'll be sure to go out and get this one. Can't wait to read it!

Hi April, Aurian and Molly, thanks for stopping by! Yes, I'm very excited about the Anthology. This is my first. Hope you like it!

Congratulations on your latest release. Anthologies are a great way for me to discover new authors and Calista and Mary are both new to me :) It's just in time for Halloween too. Books are my version of treats and I don't have to worry about cavities.

What exciting news Erin. I too love Anthologies. Love your writing and I've always thought about how gorgeous your covers are and once again seeing Jimmy Thomas on this cover just sweetens the read even more. :)Congrats on this release.
Carol L
Lucky4750 (at) aol (dot) com

Congrats on this release!! I love my favorite authors -- but am always looking for new authors ... some people are terrified they's run out of toiletpaper... for me it is that I'll be left without anything to read!!!

Na--love it. Treats with cavities...although sometimes I do catch myself munching while reading, and if it's a really good book, well....

Carole, you are so sweet! Thank you so much. I love the cover on this one too.

Girlygirl--I am so with you. I love finding new authors. I read too fast to not try new ones and I hate it when I'm not sure what I'll read next. I like to be excited about the next book even before I finish the one I'm reading!