I am so excited to be welcoming Barbara White Daille today!  Not only is she Multi-published and award winning, Barbara is one of the nicest people in the world.  (And she has a great "THE CALL" story!  Maybe if you ask her real nice, she'll share it.  There's a giveaway list at the end so be sure to read down!


A little about Barbara:  Originally from the East Coast, award-winning author Barbara White Daille now lives with her husband in the warm, sunny Southwest, where they love the dry heat and have taken up square dancing.

From the time she was a toddler, Barbara found herself fascinated by those things her mom called "books."  Once she learned the words between the covers held the magic of storytelling, she wanted to see her words in print so she could weave that spell for others.
Barbara hopes you will enjoy reading her stories and will find your own storytelling magic in them!
Anyway, without further ado, please give Barbara a warm welecome to Quinn's Essentials!
___________________________ 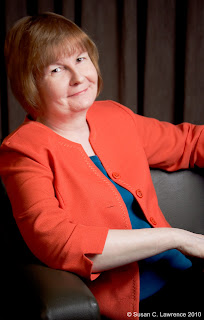 Hi, Erin and readers!
Erin, thanks so much for hosting me at your blog today.  And thank you for asking me to talk about the hero of my latest book.
Sam Robertson, from my Harlequin American Romance, A RANCHER’S PRIDE (May 2011), has to be one of my all-time favorites.  I’ll explain why in a minute.  But first, here’s a bit about his story:
Sam Robertson's life just changed. In one short day, he found out that he's a daddy; that his beautiful little girl, Becky, is deaf; and that her aunt, sign language teacher Kayla Ward, intends to fight him for custody.
There are plenty of reasons Sam shouldn't fall for Kayla. A city girl like her has no place on his ranch, particularly when she's his ex-wife's gorgeous sister. But thanks to the judge's orders, Sam's spending a lot of time with Kayla, trying to give Becky the stable home she's never known.
Despite their ongoing custody battle, Sam and Kayla's love for Becky brings them closer than they ever expected, and Sam knows that no matter who wins in court, he could still lose—Kayla or his daughter.
~~~
From the moment I first saw Sam, I knew he’d be a challenge.  He’d experienced hard times and a lot of negativity in his life based on issues with his ex.  As a result, he’d become a shade bitter, somewhat reclusive, and...well, really, a prime candidate for a tortured hero.
So, I’m afraid I tortured him.
I did what authors are supposed to do to keep readers interested in their characters:  Hit ’em while they’re down.  Pile on the conflict.  Make things worse.
What hooked me about this story was the idea of taking a well-loved plot twist—having a hero suddenly “inherit” a child, one he had never known he’d fathered—and make his conflict even more heart-wrenching by having the child speak a language he can’t understand.
I have to tell you, how Sam would react to all this really worried me! 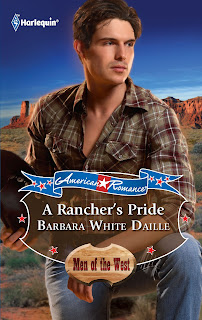 He might have had the weaker case—and the weaker determination—because he’d never had a relationship with his daughter.  To up the ante, I whispered in his ear that this could be the only child he would ever have.  And to my relief, the challenge made him fight harder—of course!  After all, he’s real hero material.
Not one twist in the story comes easily to him, though.
The title of the book, A RANCHER’S PRIDE, fits the story perfectly and describes Sam’s entire dilemma:
First, he’s a very proud man who doesn’t want to accept help from anyone—especially not from the heroine.  Having to rely on her at times during the story only adds to the conflict between them.
In addition, his pride has been battered from actions his ex-wife had taken in the past and that affect him even today.
Finally, though he struggles along the way, he soon comes to love his daughter, and she becomes his pride and joy.
Sam learns.  He changes.  And he grows.
The scene in the book when he first attempts to make a connection with Becky—when he waits, heart in his throat, to see how she will respond—made me cry.  I recently re-read the book and cried again.
Okay, I’ll confess!  I’m tearing up just thinking about it.
All of the above is what makes me love Sam Robertson.  I hope readers love him, too.
~~~
Barbara’s question to you:
I’ve had lots of great feedback about the picture of Sam on the cover!  He’s a real hottie, isn’t he?  His looks are what attract Kayla to him instantly, and I’ll admit I wasn’t immune to them, either.
But let’s go beyond a hero’s soulful eyes, chiseled jaw, and six-pack abs—just for a few minutes, I promise.  Please tell me, what non-physical aspects of a hero attract you most?
~~~
A RANCHER’S PRIDE (May 2011) was just released and has received wonderful reviews, including a 4-1/2 star Top Pick rating from RT Book Reviews.
You can find Barbara online at her web site and blog:  www.barbarawhitedaille.com where you can check out her Virtual Book Tour schedule for A RANCHER’S PRIDE!
You can also reach her via Facebook and Twitter:  http://www.facebook.com/barbarawhitedaille and https://twitter.com/BarbaraWDaille
Barbara’s looking forward to chatting, so please feel free to take a look at her question to you and to leave comments or questions for her!


Leave Barbara a comment or ask a question and be entered for the giveaway of one of The Sheriff’s Son, Court Me, Cowboy or Family Matters--Reader's Choice of one!
Posted by Erin Quinn at 7:00 AM

Hi, Erin and everyone,

I hope you enjoyed the "behind the scenes" look at Sam Robertson.

Again, I'm happy to be here today and look forward to chatting.

Hi Barabara! I'm reading A Rancher's Pride right now and loving it. What nonphysical quality attracts me most? Hmmm...that's kinda tough, but I think I'd have to say that he really listens, gives me his full attention like there's no one else alive, when we're together.

Glad I caught you before the tour was over. Take care.

Good choice on the quality. It's been a while since I've read one of those polls of a man's Top 10 Best Traits, but I seem to recall that listening skills are ALWAYS high on the list.

Thanks for stopping by!

Hey there, Barbara! You sure get around. (Shhh! I won't tell anybody if you don't, LOL!)

The number one thing that gets me hooked is quick repartee between the H/h - especially if there are double entendres.... (Insert Red Green impression here with gutteral "Hoho!" Okay. Okay. How about a simple "Hubba Hubba" instead?)

Humor! I love a man who can laugh with me and at himself. Nothing sexier than sharing a laugh with my man.

I'm with you about enjoying quick repartee between heroes and heroines. And the double entendres satisfy my love of plays on words.

Thanks for adding another great item to our list!

A good sense of humor can make up for a lot--in books AND in real life. LOL

Thanks for stopping by!

Enjoyed the interview....
A sense of humor is a must have, then intelligence. Top 2 for me.

Hi Barbara,
I'm going with earlier posters and say non-physical characteristic that is most attractive is sense of humor, but wait for my fantasy man I want someone so responsible that he takes care of everything.

Hi, Ivy, and thanks. I'm glad you enjoyed the post.

Humor and intelligence make a great combination in a character! They definitely help add to that repartee mentioned earlier.

Seems to me we've got several ingredients working already that would make a perfect hero. They're giving me ideas.... ;)

Laura - humor is turning out to be very popular so far today.

And oh, I definitely like your fantasy man! ;-) That's what the books are about, right?

In the draft I just completed, my hero goes on for PAGES at the end, apologizing to the heroine, explaining his actions, and outlining why they need to be together. Talk about fantasy. LOL

I'll probably have to rein him in by the time I get to the final version, but I'm enjoying this while it's lasting!

One thing every book needs to have to make me happy is humor. No matter what kind of book there has to be a little comic relief in there. lol The cover is great! He is definitely hot!. Love cowboy books too. I like a guy who can be a gentleman when need be but a little wild and crazy in bed.

I love a guy with a sense of humor.

Love your thoughts about cowboys, too. A man who saves his talents until he's alone with the heroine is just...pure hero material! (happy sigh)

I have to thank everyone who has chimed in so far today. The comments are *really* making me want to jump right into my next book. LOL

Donna - you're definitely in the majority.

Laughter's good for the spirits, the mind, *and* the body, and you've gotta love a man who can take care of all that at once.

Read all the comments and I also agree humor and a take charge man when needed are two great traits. I must add trust. Without trust you have nothing. A Rancher's Pride was a wonderful and emotional read. Loved that Sam was so trustworthy. You have me interested, again, in ASL. Did some research on the net.

Carol - thanks for your kind words about A RANCHER'S PRIDE. I'm so glad you enjoyed the story.

That's another very important trait, and it may be the one that supports all the others we've mentioned so far. Thank you for adding it to the list!

Hi! Wonderful interview. The cover, or i should say the man on it, is a hottie! I agree with you there. What nonphysical characteristics: is a sense of humor! I love it if he can laugh at himself. A heart! Someone thats generous, nice to others, very caring. And of course he has to listen. :) Thanks!

Hi, Shadow - you've picked some great qualities! These heroes are sounding better and better as we go along. LOL

Glad you liked the post, and thanks for the compliments about Sam.

Congratulations to the winner select by Random Name selector.... Laney 4. Laney, please get in touch with me by email at write2erinquinn (@) aol [dot] come

Thank you so much! Email has been sent.